And on that farm, he had a pig…

At my appointment for travel vaccinations in December, the doctor cautioned against my going near or touching animals, while in South America. I must have said that I would try not to, but I guess he wasn’t listening when I told him I was traveling to work on FARMS. So, after six weeks into the trip, we have spent our fair share of time around animals, sorry doc. We’ve become veterinarian assistants of sorts, even. 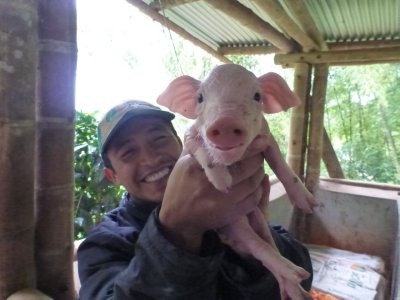 Our first hands-on experience with animals was at the Finca Campo Bello farm in San Agustin, Colombia. There, we helped to feed and bathe the pigs and clean out their pens, alongside Edimer every morning. What does cleaning pig pens entail? Mostly poop-scooping, hosing and sweeping. Of course, by the time one side of the pen is clean, the pigs are already pooping where we’ve just swept. I mean, they are pigs.

While feeding time was exciting, the final morning tending to the pigs was most worth recording. Edimer suspected that one of the female pigs would be ready to give birth, so we prepared her with disinfectants and gave her a clean, private space to give birth. And then, we waited. We attempted to evaluate a number of different pig gestures, expressions and grunts, and bet on what we thought meant certain birth. But then, Edimer decided, she was taking too long… something must be wrong…

He suggested one of the pigs may have died in the womb and was blocking the birth canal, a possibility that would kill the rest of the piglets inside and possibly the mother. The next step was to invite friends and neighbors over and compare the sizes of one another’s hands. The one with the smallest hand won, or lost, depending on how you look at it… the privilege to stick his hand in and retrieve whatever was blocking the birth canal.

So Edimer’s slight-handed friend put on a thin plastic glove and plunged his fancy fingers into the depths of a grown pig lady’s passage. Elbow deep and straight-faced, Edimer’s friend gave no hint as to what might happen next. After some more maneuvering, he removed an empty hand, covered in slimy fluids. He and Edimer took turns smelling and sticking their fingers in the dripping goop, and decided there indeed was a dead pig inside. Edimer ran quickly back to his house and retrieved a hormone to induce birth.

He injected the mother pig, and within a few minutes, we saw tiny pink pig hooves…a pig belly, and a head, moving! A live baby pig! Edimer speedily cut the umbilical cord, wiped the pig of its slime, and applied it to a plump pig nipple. This, followed by 3 more live pigs, made 4 baby pigs suckling at the teet… after many hours of wondering and worrying and waiting.

Besides the fact that they were very small, they were not particularly cute: save one redeeming trait: their cute curly pigtails. But no, Edimer promised, the tails must go! Why? Aesthetics, he shrugged. So each pig would have to have its little tail snipped, and I would be the one to hold it upside down by its little pig legs while it succumbed to this tragic fate. So 4 squeeling pigs later, and Edimer had a collection of mini-pigtails in his hand. He put them on his neck to show us how he’d make a necklace with them- that, or chicharron, right? Well, he conceded, “no valen nada” they’re not worth anything, so he tossed them into the compost heap.

We saw 4 baby black pigs recently on a hike in the highlands of Ecuador: their tails were intact. They looked so happy.