So far, we have traveled for 6 weeks in Ecuador, feeling safe in most every town or city we have visited. Still, police corruption has been a common theme in many of our discussions with Ecuadorians. We had a firsthand peak at the type of police corruption we’d heard about during an 11:30 AM Quito vs. Liga fútbol game we attended in Quito. 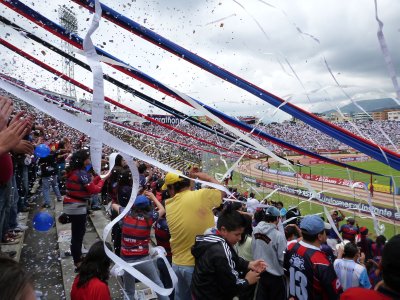 From the start of the game, we found ourselves entertained by a group of incoherently drunk men swaying about in the row ahead. They cheered for Quito, slopping Pilseners and spitting curses into one another’s faces (it was an intercity rival game). About halfway into the game however, the group moved closer to us, leaving their most drunk member with drool running from his chin onto his round belly, passed out from an early day of drinking. Soon enough, the men were asking about us… where we came from, why we had chosen to cheer for Quito etc. They passed 32 oz. beer cups between all of us and were happy to have us cheering for their team. Finally we asked about their tired friend. They answered, “O, he’s a cop, we actually just met him last night.”

The man’s story goes (details are hazy, as he was inebriated while relating it):

The man had been drunk driving the night before when he was pulled over by a cop. When the cop proceeded to announce his fine, the man offered the cop free admittance and drinks at any of the major nightclubs in Quito, at which he held some administrative position. The cop gladly accepted, and while on duty(?), accompanied the man and his friends to the bars for the rest of the night. The drinking continued through the early hours of the morning until the cop was finally belligerent. Earlier on in the binge, the men discovered the cop to be a Liga fan, so when sufficiently drunk, they dressed the cop in a too-small Quito jersey and they all went to the game to continue the festivities.

So the passed out man we were concerned about was a potentially on-duty police officer/Liga fan, left mostly unconscious by the drunken enemy he should have apprehended the night before.

“The police are corrupt here, very, very corrupt” the men concluded. And so there it was. 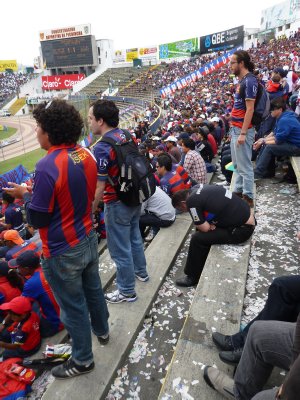