They Even Fried The Carrot Cake!

So friends and family have been asking about food since we’ve been here: mostly, “how is it?” Generally speaking, Latin American cuisine consists of rice, beans, root vegetables, plantains and corn. Supplement these basic food stuffs with arepas (or any variety of corn-based pancake or tortilla), dozens of varieties of delicious fruits, fried pig and chicken parts. Jumble this around, mix some of it in bowls, and you have what you generally eat throughout the day, every day here.

I don’t get too tired of rice and beans and fruits and veggies, but it gets pretty tough to sustain ourselves in any healthy way when the only options on the road are fried… everything. There’s fried chicken, fried chicken pastries, fried empanadas, fried chicharron (pig skin), fried cow intestine, fried fish on the bone, fried plantains, fried mashed potatoes, fried potato chips, fried and battered rice cakes, fried yucca, fried doughballs, fried onion rings, and fried corn cakes: kind of like your good ole’ people’s fair back in the States.

To say the least, we’ve jumped at the chance to buy granola and raisins and fruit and carrots to travel with, so as not to saturate our bodies too much in the saturated-fats buffet here. Still, it’s impossible to avoid having to eat at least a few fried foods a day… T.L. isn’t complaining too much about it really.

Why so much fried food? Well, foods are generally prepared stovetop, as most people do not have an oven in the home. In addition, the best option for street vendors is portable burners. So the quickest and easiest prep, which doesn’t require much seasoning or special ingredients, is frying. When I talk about heavily fried foods, this means, if you place your fried food on a stack of napkins, it will soak through around 15, while still leaving an oil mark on the table.

We had a menu-of-the-day meal recently (they usually come with 2-3 courses and a juice, and can be found at any number of small eateries that line every town)… This one included soup and salad and carrot cake, so I was pretty excited. When our meal came, T.L. asked what I thought the little fried thing was on our plates, and I said “Who knows? Just another little fried thing...” We both bit in, and said wow, that is super fried and really delicious, but what is it? Then I saw some trace of a shaving of carrot… it was the carrot cake! They battered… and fried… the carrot cake! The default healthy dessert! The sacrilege! They knew it would be delicious! So I let T.L. finish mine, as it was very rich, and I supplemented with some ice-cream later that night.

The Colombian diet is also heavy in meat: pork, beef, chicken, lamb, sausages, hotdogs, hamburgers etc. so for a mostly non-meat eating person, I’ve had to slowly introduce more meat into the diet. While T.L. had been thoroughly enjoying our vegetarian meals at Organizmo, his only birthday wish had been for meat. So, I set off to town with Itamar, a vegetarian, in search of birthday supplies. We thought we had done a good job buying some raw red meat and chicken, until T.L. told me, post-barbecue, he wasn’t even sure it was meat.

Thus far in Ecuador, however, we’ve tried a large selection of tasty, less-fried snacks, and we’ve been able to make some of our own food again at our WWOOF site in Baños and couchsurfing. So we’ve made it so far without having to eat guinea pig, but it’s coming sooner than later. House-pet-impaled-on-metal-stick-over-hot-coals (cuy) has yet to ignite my appetite, but who knows what we’ll eat at the end of a treacherous day of hiking! 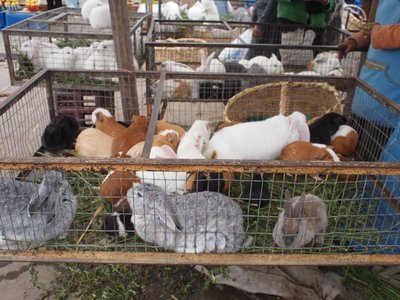 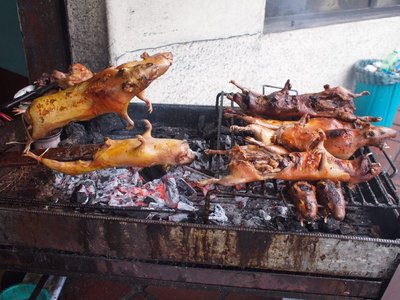