We spend a lot of time around dogs, as does everyone in Central and South America. Since birth control for dogs is as hard to come by as it is for people, puppies abound and hungry dogs are always around, well, just looking very hungry. 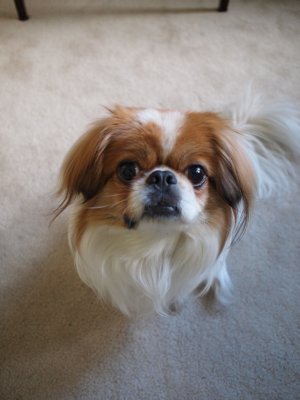 Dogs here are quite different from the dogs we encounter at home, especially set against the leather-jacket wearing, rhinestone-collared poodles of Manhattan. In fact, dog behavior has entered into many conversations we've had with other foreigners here. 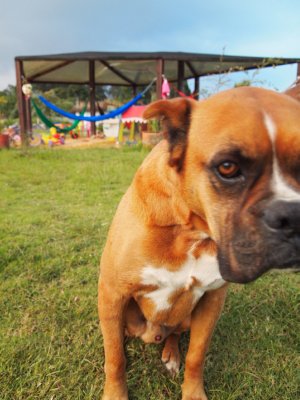 One common topic of discussion is: Would you rather... be a dog down here or in the United States?

Pro-South American life, you have miles of mountains, jungles and farmland to explore, and no electric fences to hold you back. You're on your own for food most of the time, which means hunting, if you're into that sort of thing. Life is pure adventure. 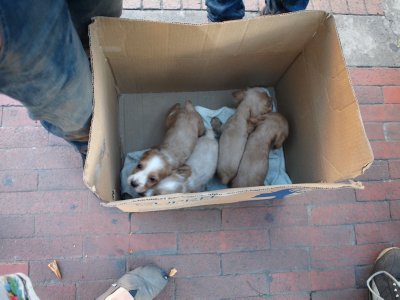 Cons are maltreatment: children throw stones at you, men kick you, women hit you on the head with pots, and your mom doesn't even care much about you because she has so many damned puppies already. You probably have scabies, ticks, fleas or all of the above. If you are a female, you are probably pregnant, or nursing and consequently undernourished. Finally, a dog-eat-dog world means defending yourself through brutal fights, day in and day out.

On a separate note, we've shared many stories with friends here about dogs who seemingly have no owner (but don't seem stray), who befriend you: 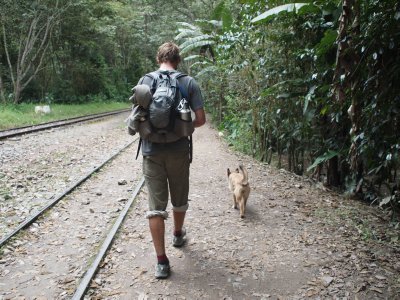 1. One of our first hikes in South America was outside of Bogota, Colombia, where two dogs became our trekking sidekicks for the day, following us up a few-hour summit and all the way back down, stopping to break whenever we did, napping at our feet, and parting ways where we had met them at the start of the hike. 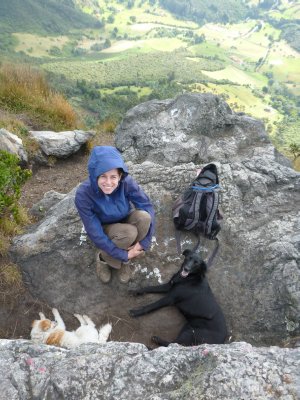 2. Another afternoon, sitting on my sarong on the beach of Canoa, Ecuador, a golden retriever approached and nuzzled under my arm. I didn't pet it, which we've found is usually a mistake (attachment, scabies, fleas and parasites). It didn't leave, but looked me in the eye and then... it vomited. All over the sarong. Apparently it had just lunched on fish parts, petroleum and kibbles and bits... because after repeated washings, the oil from its regurgitation still shows proudly on my most versatile piece of travel clothing.

At first it began to eat its vomit off of the sarong, and then, when I went to dip the sarong in the ocean, the dog accompanied me, to, in and from, the water. When I resumed my seat on the sarong (now-marked-territory) the golden retrieved made himself comfortable on it with me. Countless attempts at shoo-ing the dog later, T.L. returned from surfing and I related what had happened and introduced him to my new companion.

We both decided to wade into the water, so the retriever followed and swam mostly on top of us the whole time. T.L. was able to coax him out of the water, so he walked up to our small pile of clothing, and planted his sea-water covered self atop our things. This was the start of a relationship that lasted the entire length of our stay in Canoa: whenever we stepped out of our hostel, this Golden found us. People began asking about our dog that wasn't our dog, who continually embarrassed us by relieving himself in all ways around the beach. T.L. suggested it knew I grew up with golden retrievers, a breed of dogs apparently comfortable relieving themselves on my things.

3) Our friend Fabian wins in the adopted-dog-story category: A small mut began following him around San Agustin, Colombia, although Fabian refused to feed or pet it. One day, Fabian trekked out to a friend's farm, hours away from town. The dog followed him the whole way, no matter how Fabian tried to dissuade him. Although Fabian refused to feed the dog during his 4-day stay, the dog remained. On the morning Fabian made to leave, his friends found themselves short a turkey. They searched the farm for the turkey, only to find the messy clues that led to the dog. Fabian summed up for us: “the dog ate the turkey... it was a really small dog, and a really big turkey...I had to pay for the turkey... like 55,000 pesos (around 30 dollars)...I hated that dog.” He shook his head in defeat.

(something I am still working on, J's are pronounced like H's in spanish)

77 °F
View To the equator and beyond! on tltisme's travel map. 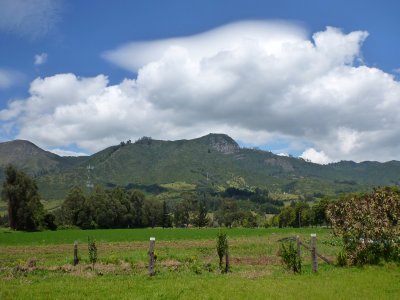 While working at Organizmo I consistently admired the rocky topped mountain that rose above all the rest. Our hosts mentioned early on in our stay that it was a great hike and they recommended it for all their volunteers. Amy and I planned on doing it our first weekend but less than favorable weather and health forced us to postpone the hike. I wanted to get up early and do it the morning of my birthday but I was still recovering from the stomach bug and decided to push it back again. With workshops duties looming on the weekend, our last chance to reach the summit was Friday morning. Thursday night we filled our water bottles with filtered water from the kitchen and grabbed some grenadias, apples, and a peach and hoped for a clear morning.

Friday dawned gray but the sky looked encouraging and we were on the road before seven. A short walk down the paved road toward Tabio and we turned up toward the mountain. 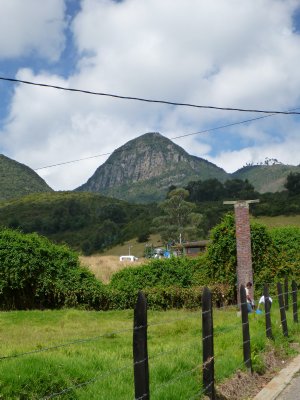 Still paved for another half kilometer or so, we passed houses and barking dogs. As we reached the end of the pavement a short-haired black dog and his smaller brown and white companion greeted us. I thought they were just after the end of my cheese sandwich breakfast and tried to ignore them. We continued upward, the trail beginning up through the woods as we left the houses and farm animals behind, but the two dogs tagged along. The trail was a stone and concrete affair for the first kilometer or so before it gave way to packed earth and washed out ravines through the dense growth of bamboo, bushes and small trees. Occasionally hikers before us and water had branched off onto divergent trails but they all came back together soon enough and the way was easy to follow. As we steadily climbed up the steep hillside I tried not to worry about the warning of robbers on the trail we had received from a stranger driving past days earlier. Our hosts dismissed the warning, saying they had hiked the trail many times and never seen another soul, let alone someone waiting to waylay climbers. This made sense, if someone wanted to rob people there were far easier places for them to do it than halfway up a mountain where very few people ever went. I continued convincing myself not to worry while I conjured up creative ways to hide my camera if a robber materialized. I was also growing fonder of our canine companions by the minute as they trotted along with us and would give us an early warning of other humans. Unless they were the thief's dogs and were leading us right to their master...

After only an hour of climbing the clouds lifted and the stone face of Juaica emerged above us. We were close! By 8:30 we had reached the top, a small clearing with a few hardy trees and the remains of a fire. We followed a trail down toward the cliff faces of the peak, eventually we found the edge and a good rock to sit on while we ate our fruit and Clifbars and observed the valley below. A spectacular view! 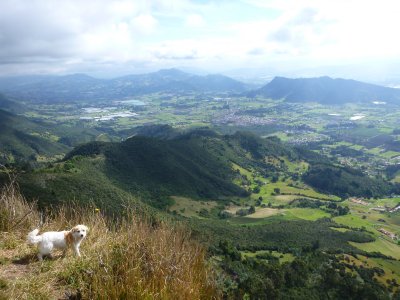 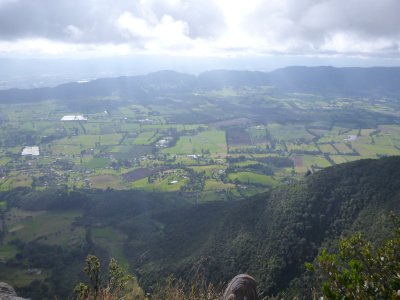 My GPS told me we were at 10,036 ft, the highest I have ever been outside of Colorado I believe. Organizmo was about 8,500 ft above see level so our climb was only about 1,500 vertical feet but we must have adjusted well to the altitude in the valley because the added height did not have any negative effects on us. We picked out Organizmo by the greenhouse roof and could make out the two domes (black at this point). We could see both Tabio and Tenjo on either sides of the valley and over the next mountain ridge to the far valley nearing Bogota. Three hawks rode the thermals and sailed past our breakfast spot and the sun beat down on the panting puppies who collapsed in the grass next to us. 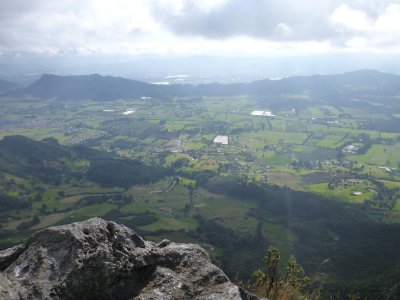 We enjoyed the view and our rations before beginning the walk down. We were reinvigorated and very glad we had gotten the chance to climb Juaica. I spent most of the descent scoping out walking/self-defense sticks and finally finding the perfect bamboo pole and hacking it down with my knife. Amy tolerated my stick hunt and we met no one on the way down though we did hear chainsaws and glimpsed a man herding his cows along a different trail. The mountaineering dogs remained with us until we reached their home again and we bid them a fond farewell. We returned to Organizmo before noon, feeling accomplished and invigorated. 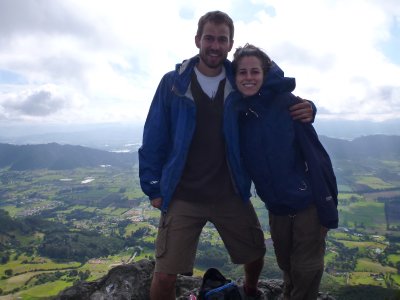