66 °F
View To the equator and beyond! on tltisme's travel map. 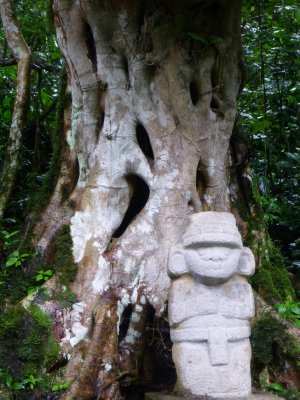 We joined a throng of well-dressed people (faded and pre-wrinkled designer jeans, sporty shoes, colorful tops, gelled hair, headphones, and stylish bags) leaving the metro station and entering the busy Medellin bus station at 8 PM on a Saturday night. The metro took us right to the Terminal del Norte where we had come in from Bogota and where our bus south left from. We were well provisioned for this ride after our last extra long bus trip. All our containers full of water and granola, sandwiches, and fruit packed (much of it bought from the all-inclusive, Wal-Mart like Carrefour of Colombia). After some tense waiting and confusion trying to board the correct bus, our main bags were safely stowed below and our essentials kept with us aboard as we tried to relax. This Bolivariano bus played Cowboys vs. Aliens in dubbed Spanish throughout the bus for all passengers viewing pleasure. I tried to follow along and maybe learn some espanol from Daniel Craig's and Harrison Ford's spanish personas but eventually drifted off to sleep as the plot became more ridiculous and my eyes grew tired of focusing on the small TV. 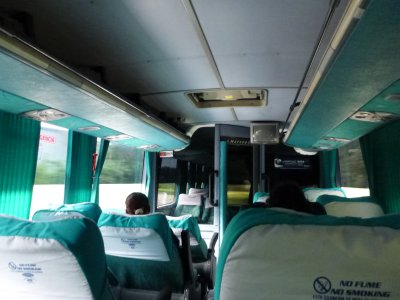 We, well Amy, had asked the driver how long the trip to Neiva would take, mas o menos (more or less, I have found it is often a decent answer when you are not sure what is being said). We were told about nine hours and arrived groggily in Neiva about twelve hours later, not so bad considering our first long distance bus experience. As we entered the Neiva bus station we were besieged by competing bus employees shouting out every likely destination we could have in mind and attempting to usher us along to their bus (this occurs at every terminal when an apparent foreign traveler arrives though to varying degrees of aggressiveness). We decided to hit the bathroom first (about 15 cents which is a common charge in public restrooms) and check out all the bus options before giving our money to anyone. In the end, we returned to one of the first guys who had approached us but got our ticket for 20,000 pesos (a little more than ten dollars) instead of us his original price of 30,000 for the four hour trip to San Agustin. We were escorted outside and took the last two seats in the back of the small bus as it cranked up and pulled out of the station. We always ask when a bus is leaving but the problem is that drivers almost always say now or soon when in fact it usually takes the bus or van to be close to full before they leave. This has never taken very long and large buses often do run on more or less set schedules as I discovered in Quito when I ran to the bathroom and assumed I had plenty of time since only a few seats were taken but had to run to catch the bus as it pulled out. 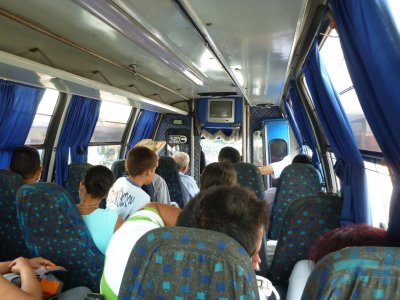 This smaller bus seemed to be half filled with passengers going to Pitalito (the larger town on the main road before going up into the hills around San Agustin) and the other half hopping off along the way and being replaced by other passengers picked up from the roadside. This is characteristic of all transportation we have seen so far, even personal cars and trucks will usually stop to pick up passengers if they have the room. I have to keep reminding myself of the fact that essentially whatever road we are on it is only a matter of time before a taxi, bus, or other vehicle will come along that we can hold up our arm for a ride if we so desire. From an economic perspective this makes automobile transportation much more efficient: most vehicles traveling on the road are full (often overflowing with lashed on cargo and dangling passengers from all possible holds). This practice allows individuals who can afford an automobile to maximize its utility on each trip while providing pedestrians with ample transportation options even on the most remote mountain roads (providing some positive externalities to go along with all the negative ones caused by motor-vehicle use). Though roads are winding, often in poor condition, and driven aggressively there seem to be fewer accidents than you would imagine. I believe this is due in large part to the specialization in driving that occurs due to greater economic and social barriers to owning and operating a motor-vehicle. Professional bus and taxi drivers know their routes extremely well and are more than comfortable passing on downhill curves if the opportunity presents itself. Most people walk and take public transportation everywhere they need to go and may own a motorbike but few own automobiles. Those that do drive are quite competent and I have been impressed with the many uses of honking here, rarely in frustration but often as a warning when approaching a blind switch-back turn or to stop a pedestrian or car from pulling out ahead. Though I have traversed the most insane roads of my life already on this trip I have surprised myself with my calmness and at this point relative comfort on rough and precipitous mountain drives. There are too many breathtaking landscapes and intriguing sights to look at out the window to be worried about the driver anyway. I am sure there are some less than satisfactory motor-vehicle operators on the roads down here but none seem to be lacking in confidence and practice which goes a long way.

Ok, back to the bus trip: 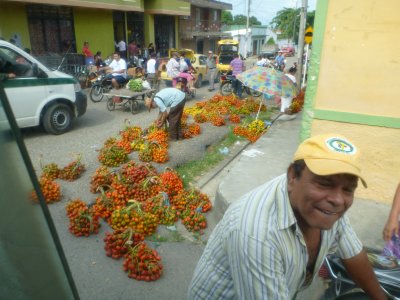 After one military stop on the road where all male passengers were taken off the bus and patted down for weapons we reached Pitalito. We had wondered if this small bus would indeed take us to San Agustin as we had been told and our suspicions were confirmed when we were rushed off the bus at Pitalito and into the back of pick-up truck outfitted with benches and bed cover (known as a camioneta), while our backpacks were unceremoniously tossed on the rugged roof-rack. We were a little annoyed with our downgrade in transportation comfort but we had the truck bed to ourselves and were excited to be nearing our destination. Our bus driver had said he had paid this truck driver for our transport which we hoped was the case and we kept our eyes pealed on the scenery passing behind us and to spot our bags if they tumbled from the roof. 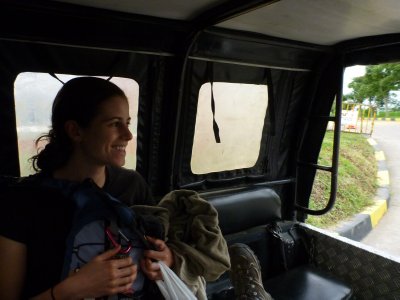 We arrived in the the cute, cobbled streets of San Agustin in a slight rain around 2 o'clock on a Sunday afternoon outside the small tourist information center. After encouraging us to stay at a certain hostal a man who looked to be an employee of the centro touristico led us down to the market to find a ride to Finca Campo Bello. We had been told drivers would know where it was but the first few were perplexed and we started to get a little worried as the rain fell a little harder and our packs felt a little heavier. At last the helpful guy found a driver who was going that way and we hoisted our bags onto the roof rack of his camioneta. Amy went to buy a mango to slurp on (50 cents) in the market nearby while I watched the driver and others load more and more sacks of corn, racks of eggs, and other goods on top and into the back of the truck. 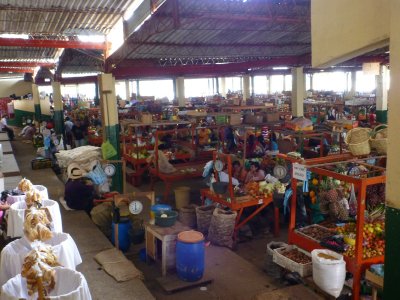 As Amy returned other passengers began piling in until there were seven of us sitting in the back and five men standing on the tailgate as the driver cranked up and pulled out of town. Fourty five minutes of bumping, jostling, and straining to hold on as we crept along a mountain trail we were told to get out. We stood next to a large green house wondering if this was the coffee and pig farm we had signed up to work on for the week. A smiling teenager with glasses emerged from the adjacent house and welcomed us while helping us move our bags inside. We entered and saw a faded Finco Campo Bello logo on the wall and breathed a sigh of relief as we let our bags fall to the floor and took a seat in the offered plastic chairs. 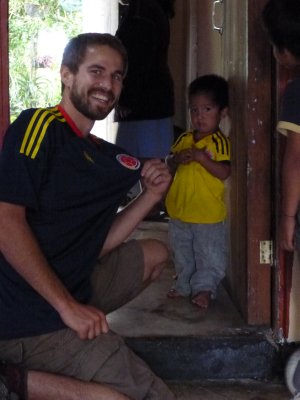