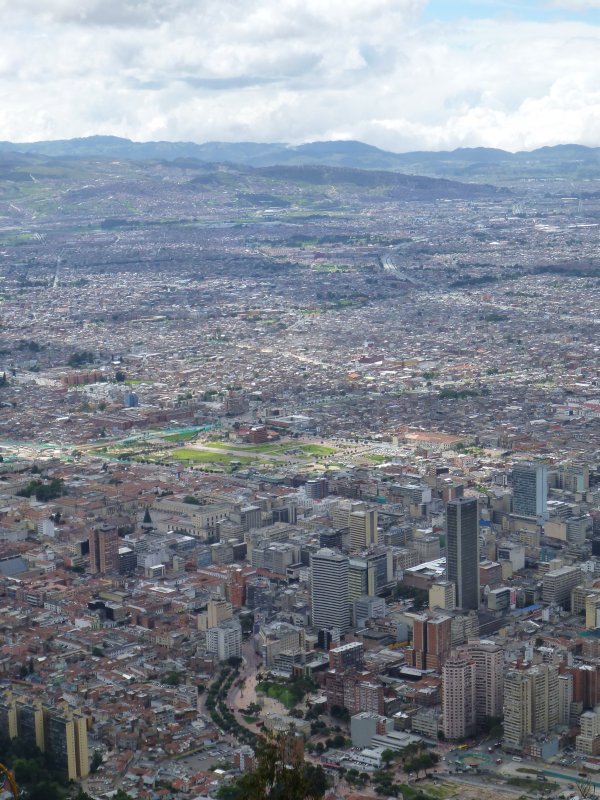 Bogota is a city of over 10 million and has been plagued with terrible traffic. Recently they have enacted a simple policy to reduce vehicles on the road called pico y placa (peak and plate): each weekday four different final digits of personal vehicle license plates are not allowed in the city limits between 6am to 8pm. This results in an individual not being allowed to drive on two weekdays a week unless they can afford to own two cars! Even this can backfire as the digit combinations are rotated every six months. Public transportation abounds in the form of buses (as well as countless little yellow taxis) so the policy simply keeps some cars parked (40% of personal vehicles daily) during the work week but does not seriously inhibit personal transportation. This seemed comical when I first heard it but overall it is a very simple and effective policy that has been adopted in other cities in Colombia (including Medellin) and around the world. Traffic is still bad at rush hours so I cannot imagine what it was like before this policy was implemented. 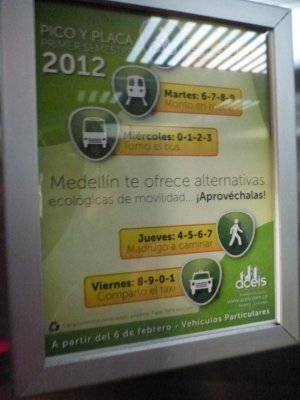 Blockbuster is a booming business here. Apparently Netflix has not entered the market, I haven't seen any Redbox or other video rental stores either but Blockbusters are very nice and popular.

Gasoline is around 8600 Colombian pesos a gallon. When we first arrived the exchange rate was nearly 2000 pesos to 1 dollar but that has dropped to 1770 to 1 currently. That makes gas around $4.75/gal while diesel is cheaper at around 4 bucks. Overall Colombia has not been cheap for us. Food is less expensive than the States (a nice daily lunch or dinner special with soup and a small desert is btw. $3-$5 in cities) and taxis are cheaper (but we only take them when really necessary) but metro rides are around a dollar and bus fares are comparable to US ones for the most part. We expect it to be easier in Ecuador, Peru, and Bolivia to stay on our tight budget.

Fingerprints are used for everything, sometimes with a signature, sometimes in place of one. Changing money and buying a cheap prepaid cell phone (about 20 bucks for phone, SIM card, and starter minutes) are when we have come across it but we are told it is a very common practice. Amy almost put her thumb in the ink pad before the woman at Comcel grabbed her pointer finger.

Rat tails and mohawks are very common. I had a rat tail in Kindergarten...I still remember it fondly, and a mohawk briefly when most of the UMW soccer team got them for the homecoming game. It seems the real footballers here all have hawks and the majority of adolescent males have some variation of the haircut.

I will be adding more funny facts to this post when I come across them. If you have a question about any post leave a comment!