Sunrise, school uniforms, and stopped on a mountain road

getting the bus from Bogota to Medellin

79 °F
View To the equator and beyond! on tltisme's travel map.

We woke up at 5:30 yesterday morning and were out waiting for the bus in front of Organizmo by 6. The sun was rising behind the mountains and the mist was heavy on the fields. We were leaving a beautiful place but we were excited to see more of Colombia out the bus window and get on with our travels. We flagged down the Bogota/Terminal bus and were on our way. Monday was the first day of school after summer vacation for kids in Colombia and plaid skirts and colored sweaters were everywhere. There was a Bolivariano (highly recommended to us) bus to Medellin leaving at 8:20. We thought we would have enough extra time to buy a cheap cell phone and snacks for the around 10 hour ride. We underestimated Bogota traffic at rush hour on a monday morning. 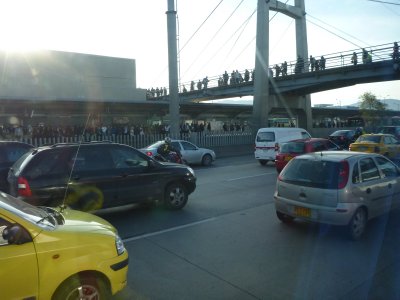 Normally only a little more than an hour, we rode that bus nearly three through stop and go traffic to its final stop at the bus station. We thought the next Bolivariano bus was not until 11:30 but when we got to the window the woman told us the next bus was in diez minutos. I ran to grab some food while Amy got the tickets. A couple of arepas (pancake like corn or flour cakes sometimes with cheese inside), a salami and cheese sandwich or something like that, and a random roll that I picked went along with our other provisions onto the bus. Luckily we had brought a generous amount of water and other fruit and granola bars. 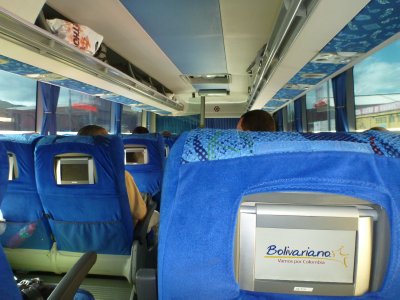 The bus was nice! (Interesting security measure: an employee walked down the aisle after everyone was seated with a video camera to document faces) It was not crowded and we relaxed as we watched the development of Bogota fade into the hills. 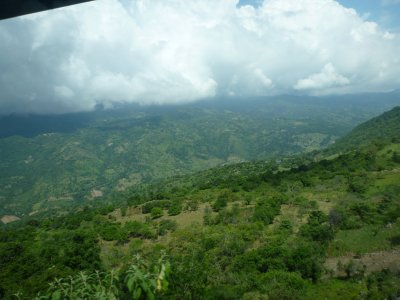 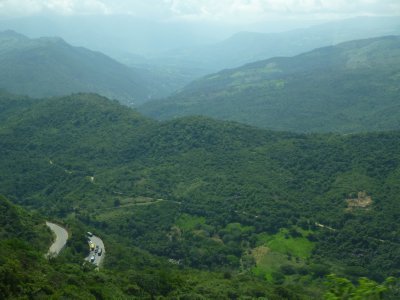 Our route took us down from the mountain chain where the capitol lies (the Cordillera Oriental), across the Magdalena River valley, and back up into another piece of the Andes, the Cordillera Occidental. 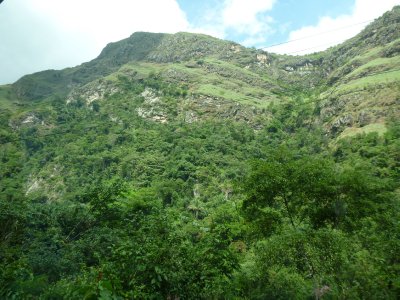 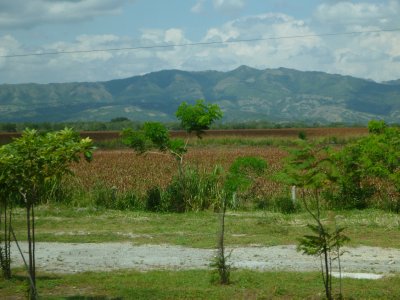 Fields of what looked to be a red grain, quinoa I believe. 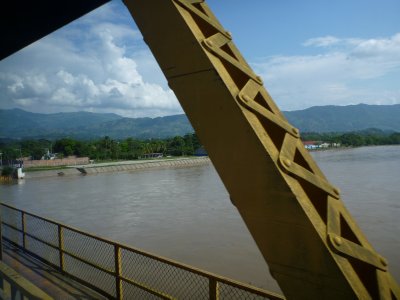 Crossing over the Rio Magdalena 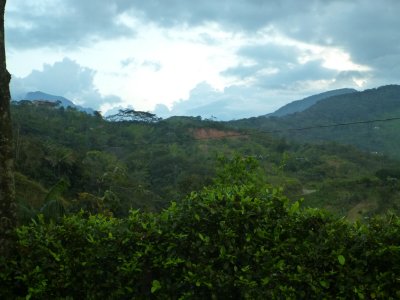 Nearing sundown on a winding mountain road we thought we were getting close, maybe only a couple hours away, when the bus came to a halt. The bus had stopped a couple times earlier for a few minutes on a piece of one way road where work was being done or something but after a few minutes the engine was turned off and we knew this delay was a little different. All we could see from the bus was a line of vehicles ahead of us curving around the mountainside. After about half an hour a few vehicles passed heading the other direction but we realized they were just trucks and buses from further ahead in line who had given up to seek an alternate route. I have no idea how large a detour they had to go to get around or even if they were trying to do that, they may just have been going back, going home, assuming this road would not be passable for a while...After three hours a police car drove past, up the line of cars. I think there was an accident and in our remote location this was the first responder. Later an ambulance, other emergency vehicles...by this time I was trying to sleep so I wasn't paying as much attention. It rained for a while and I was glad that at least we had the bus to wait in. The onboard entertainment was still working with the bus off and I half watched Casino Royale in dubbed Spanish. Daniel Craig would have gotten to the bottom of this roadside snafu in less than an hour I am sure. Just after midnight the bus cranked up and I thought we were back in business. Then I realized we would be getting into Medellin at 2 or 3 am. We had arranged to stay at a girls appartment on Couch Surfers (more on this amazing network later) but had managed to email her with the kindle from our sticky spot on the side of a mountain in Colombia to say we probably wouldnt be getting in until late. She replied with concern and said to call when we got in, she would be going to sleep around 12. The bus stopped again and turned off, false alarm, just moving up I guess. Sometime around 3 or 4 am we finally began to move again and kept rolling. Amy and I had been concious of rationing our water and were down to just PowerBars and fruit leathers in our pack, we wondered how the rest of the passengers were as content with seemingly no water. In the United States it would have been a bus of very angry people but somehow everyone on board accepted this massive delay with a shrug. One of the few locals living in the area came to sell coffee to passengers at one point and it sounded almost like a party out the door of bus for a little while with laughter and friendly banter as the drivers and passengers passed the time. Anyway, we finally got off in Medellin about 7 am. This was our first glimpse of the city this morning as I groggily tried to put my stuff back in my pack and enter a new urban area. 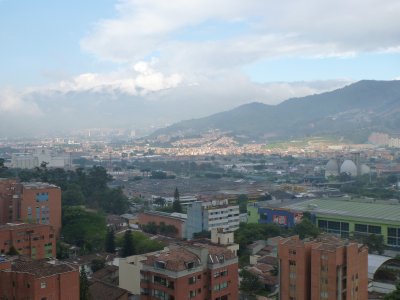 21 hours total on the bus for what was supposed to be a 10 hour trip...yikes.